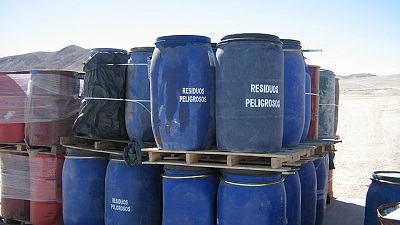 Hazardous Waste Drums
The Environmental Protection Agency (EPA) RCRA regulation allows a container that once held a non-acute hazardous waste to be considered empty and not subject to hazardous waste regulation when all waste that can be removed has been removed using common practices such as pouring, pumping, and aspirating.

The regulations also specify that:

A container that held a compressed gas hazardous waste is considered empty when the pressure in the container approaches atmospheric.

(i) The container or inner liner has been triple rinsed using a solvent capable of removing the commercial chemical product or manufacturing chemical intermediate;

(ii) The container or inner liner has been cleaned by another method that has been shown in the scientific literature, or by tests conducted by the generator, to achieve equivalent removal; or

(iii) In the case of a container, the inner liner that prevented contact of the commercial chemical product or manufacturing chemical intermediate with the container has been removed.

About The Author: Don Jackson is retired from the U.S. Environmental Protection Agency (EPA). Various roles at the EPA included: Hazardous Waste Management, Safety & Health Instructor, Facilities Safety and Health Inspector, ES&H Technical Writer, and Wastewater Equipment Operator as a Senior Environmental Employee. He has been conducting HAZWOPER courses throughout the country for approximately 25 years.