What Are Escape Hoods? How Do They Work?

Say there’s a fire in your facility – can your people make it to safety? Or what if you work in a facility that uses toxic chemicals or gases – ammonia, chlorine, or any of a number of other toxic industrial chemicals (TICs) – are your people protected? A lot of companies keep a store of escape hoods for their workers, to help them out in just such circumstances. And some go even further, providing hoods that can also protect against possible terrorist attacks with chemical or biological weapons. But regardless of the level of protection you need (or wish) to provide your workers, you should know something about escape hoods so you can select a good one.

Before we start, though, there’s a very important regulatory issue to mention: you are not permitted to issue escape hoods to workers who are expected to be routinely exposed to these hazards – escape hoods are NOT a substitute for normal workplace respiratory protection. So, for example, you cannot give a fire escape hood to a firefighter. 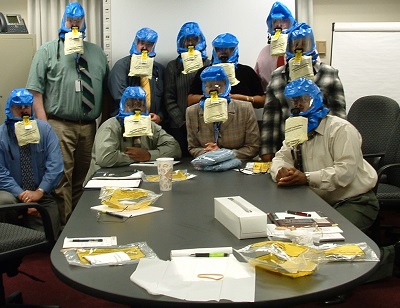 How they work and types of hoods

There are a number of types of hazards your workers might face and each one calls for a different type of protection. Some agents (particles, dusts, bacteria, etc.) can be filtered out, others can be absorbed or adsorbed onto some sort of medium, and others might need to be reacted with chemicals or catalyzed to make them safe. Carbon monoxide, for example, is a gas that can’t be filtered, but it can be catalyzed to form much less dangerous carbon dioxide gas, while ammonia can be absorbed by activated charcoal. If chemical weapons are your concern then it might also be necessary to impregnate the activated charcoal with other chemicals to help inactivate them. The bottom line is that any escape hood will have at least one (and in some cases, several) layers of filtration designed to remove or reduce the levels of whatever is in the air to safe levels.

Escape hoods might be powered – that is, they might include a fan that runs on batteries to force air through the various layers of filters. These fans can help to force air through the filters, making it easier to breathe comfortably – but they add bulk and weight to the hood, and if a person is still wearing the hood when the batteries run out then breathing becomes much more difficult. Some hoods also come with bottles of air that make filters unnecessary – the problem is that the air bottles can be bulky and they don’t last very long. In addition, when an air bottle runs out of air, there’s nothing left to breathe while even a filter that’s experienced some breakthrough will still provide some degree of protection.

Most escape hoods will be packaged into an airtight pouch; this might, itself, be stored inside a protective cover. When removed from the pouch, an escape hood is fundamentally different from a gas mask or other form of air-purifying respirator (APR) in a couple of ways. First, escape hoods are designed to let an untrained person escape from a location in which the atmosphere has suddenly become dangerous – they are NOT intended be used to work in such an environment for a prolonged period of time. Nobody should be wearing an escape hood for any longer than the amount of time it takes to escape from their office or whatever location where they work. Typically, then, they don’t fit onto the face; rather, they tend to have flexible neck dams that make a seal against the neck. Some have clear plastic visors; in others the entire hood is transparent to let the user see. Virtually all have a nose cup connected to the filters.

As far as types of hoods go, there are two primary categories – fire escape hoods and other. The “other” category includes hoods that might be used to escape from, say, a leak of ammonia or some other TIC; but they might also be used by a building security guard following a terrorist attack using chlorine or even mustard gas. 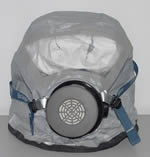 Regardless of what type of escape hood you get, you owe it your workers and to your company to make sure that they’ve been certified by some reputable organization – most of the time this will be NIOSH, although some hoods are ANSI-certified. There are some important differences in how these certifications are performed, as well as some nuances. And one important thing to remember – if you are providing your workers with escape hoods, you should provide them with hoods that have been certified by a third party (i.e. not the company that makes or sells the hood) to meet some set of standards; the most common standards used in the workplace are those of NIOSH and ANSI.

First, a little bit about the certification process.

NIOSH (the National Institutes of Occupational Safety and Health) is one of the certifying bodies and NIOSH maintains its own testing laboratory. NIOSH, as part of the federal government, can publish regulations and regulatory guidance documents as well as its respirator standards; you can find these all on the NIOSH website ( http://www.cdc.gov/niosh/topics/respirators/). For a hood to become NIOSH-certified it has to be tested by NIOSH (they maintain their own testing facilities) and must meet the applicable NIOSH standards. But the company seeking certification can’t just ship its masks off to NIOSH for testing – first they have to do their own testing to make sure the hood is up to snuff, then the hood must be tested by a third party lab (not NIOSH).

When it seems likely that the hood is up to snuff an application package is sent to NIOSH and, if NIOSH agrees it’s ready for testing, the company will ship a pallet of hoods off to NIOSH. Over the next 6-12 months NIOSH will put the mask through its paces – it will be checked for physical characteristics (how hard is it to breathe through, how long does it take to don, can the user see clearly, and so forth) as well as for its filtering and air purification capabilities.

The latter are tested by placing the hood in a chamber filled with target concentrations of contaminants while the air inside the hood is sampled – for example, to meet the ammonia standard the hood must be immersed in air containing 1250 ppm of ammonia and the interior concentrations have to remain lower than 25 ppm for at least 15 minutes. All of this takes place while the hood is on a dummy head-shaped apparatus that “breathes” through the mask to simulate the breathing of an actual wearer. If the mask passes all of the tests then it’s given NIOSH certification; otherwise it’s sent back to the manufacturer for continued work. NIOSH maintains a list of certified equipment (appropriately enough, called a Certified Equipment List) that you can access and search online ( http://www.cdc.gov/niosh/npptl/topics/respirators/CEL/) to see if the hood you’re interested in is actually NIOSH-certified, or to search for a certified hood that will meet your requirements.

The American National Standards Institute (ANSI) certification process is a bit different. First, ANSI doesn’t do any of the testing itself – ANSI publishes the standards and it has a list of approved testing laboratories. As one example, ANSI standard ASTM 2952 ( http://www.astm.org/Standards/E2952.htm) describes how escape hoods must be tested and the performance they must exhibit.When the manufacturer wants to certify a mask they send it to one or more of the certified testing labs, who will put the mask through its paces. When the mask has been shown to meet or exceed the ANSI standards in each category the mask is considered to meet ANSI standards – but there is no ANSI certification the way there is a NIOSH certification.

OK – so let’s recap a bit. For any number of reasons you might want to provide people at your facility with escape hoods – it could be to escape a fire, a chemical leak, or perhaps you’re worried about terrorists attacking with chemical or biological weapons. For whatever reason you’re buying the escape hoods, it makes sense to ensure that they’ve been certified by an appropriate certifying organization – the two most common are ANSI and NIOSH. Of these, NIOSH performs the testing itself while ANSI oversees the testing process itself; meeting ANSI standards is voluntary while NIOSH standards have the force of regulations.