Posted by Dr. P. Andrew Karam on 4/17/2017
Share |
I have a friend who used to be a lawyer specializing in personal injuries – she represented the businesses or people who were being sued. A lot of her work was preventative in nature – advising her clients on how to avoid claims by eliminating (as much as possible) opportunities for injuries. And, although she did deal with a number of dramatic incidents, simple slips and trips were a huge part of her work. Someone slipping on a greasy spot or tripping over the transition from carpeting to linoleum isn’t nearly as dramatic as, say, falling down an elevator shaft or dropping a pallet on a worker’s foot – but they happen a LOT more frequently. And the thing is, slipping and tripping can happen ANYWHERE – slipping and tripping accounts for 15% of all accidental deaths, a quarter of all reported injury claims, and over 95 million lost days of work annually. Obviously, you don’t want people slipping or tripping at your workplace – but lost time is lost time, whether it happens at work, at home, or somewhere else. So you’ve got to try to make your workplace safe, but it also makes sense to encourage your workers to take these lessons home with them as well. 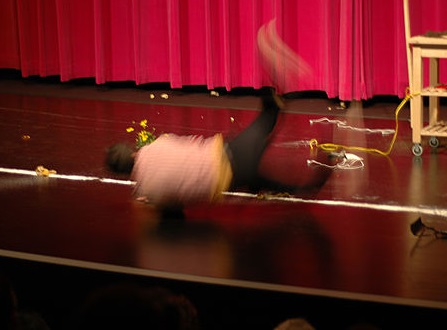 A man slips on a banana.
Source: flickr.com/photos/[email protected]/1808153553
It might sound pretty obvious, but there’s a difference between a slip and a trip and you have to treat them differently. Slipping is when you step on something and lose traction; tripping is when you catch your foot on something. With a slip you’re as likely to fall backwards and forwards, or even to do a split if one foot shoots forwards; with a trip, you’re more likely to fall forward. Slips can sprain or tear muscles and ligaments in addition to possibly breaking bones; trips can also cause upper body injuries as a person tries to catch themselves. And that’s if the slip or trip is on a flat surface – if a person falls in front of a moving vehicle, down a stairway, into a hole or trench, or into something else that’s dangerous then the injuries can be even worse. So let’s look at them one at a time.

Slips result from a loss of traction. This can be from stepping on a slippery surface, from having footwear that doesn’t offer enough traction, or both. So part of the answer is pretty simple – make sure the people are wearing good shoes or boots with non-skid soles when they’re at work, and help them to understand the importance of wearing the same sort of thing when they’re away from work. Unfortunately, there are many people with a sense of style, and a lot of stylish shoes (well, even a lot of un-stylish dress shoes) have smooth soles. I remember one pair of dress shoes I had that were so slippery when they were new that I was skidding on linoleum, tile, and even on smooth concrete until they were worn enough to start gripping better. The problem was primarily that they were leather-soled and the leather just had to become worn enough to start having traction. Thank goodness I got the shoes in the summer; trying to walk on ice or snow would have been a bit challenging.

Of course, footwear is only part of the problem, and the part that you have little control over (although you can issue safety shoes to your workers, or give them an annual allowance for safe footwear). What you have much more control over is the environment at your facility – especially the housekeeping. You really want to watch out for puddles, oily and greasy patches, ice (in the winter or in cold rooms), even spilled powder or sawdust on a smooth dry floor. Good maintenance will help to keep pipes from leaking and making these slippery spots; good housekeeping will help to keep them under control – ideally, any slippery spot will be identified and cleaned up quickly. Training can help with this part – make sure your people know to report leaks and puddles as soon as they see them, instead of ignoring them or hoping someone else will make a report, so they can be cleaned up quickly. The other thing you can do is to try to install non-skid floor covering wherever possible. The deck of the submarine I was assigned to, for example, was painted with a heavy textured non-skid paint to help keep us from an inadvertent dunking when the deck was wet. Interestingly, the deckplate used in many parts of the sub was textured steel (we called it “diamond-deck”), but it was smooth metal that still got slippery when it got oily.

So that’s the slipping part – good footwear, good maintenance and housekeeping, and good flooring. What about tripping?

Trips are actually a bit harder to control because there are so very many ways to take a tumble. Believe it or not, transition pieces from carpeted to uncarpeted surfaces are among the worst, especially if the carpeting is starting to come up at the transition. Other floor problems can cause trips as well – loose tiles, uneven floors, damaged steps, carpeting that’s starting to come up – all of these can catch the foot and cause a tumble.

Cables and wires are another good source of trips – these might be temporary (running a power line for a light to be used for maintenance) or perhaps they were meant to be temporary and were simply never fixed (a power cord for a new desk light). Ironically, safety boundaries can become a tripping hazards if they’re set low to the ground. And of course there are a lot of housekeeping-type tripping hazards – clutter that’s built up in the workplace that can get in the way. Low drawers, shelves with material sticking out into the flow of traffic. The biggest tripping hazard, though, is inattentiveness – people walking along and not noticing what’s in front of them and underfoot. Simply paying attention can avert the majority of trips – noticing enough to step over an electric line or to avoid a box on the floor, dodging an open drawer, and so forth. If you can get your people to pay attention to their surroundings instead of texting, woolgathering, sightseeing, or being distracted by conversation then you can prevent a lot of trips and falls.

As I mentioned earlier, slips and falls cause a lot of injuries; for this reason, there’s a ton of material you can access to try to help you avoid them at the workplace and at home.

Here are a few: