How Much Current Can an Electrical Line Carry?

Boy – there are so many answers to this question, but the best is “It depends.” What it depends on primarily is the design of the electrical line – a high-tension power line is going to carry much more current than will the feeder line to an office (or apartment) building, and that feeder line will carry more juice than the line that runs to your home is going to carry. So the best answer, again, is “It depends.” But more important is that you have got to keep your electrical loads comfortably within the carrying capacity of your electrical lines, whether that’s the line feeding your home, your business, your shop, or whatever it is that you’re wiring up. In fact, you really shouldn’t exceed about 80% of the rated capacity of any electrical line, just to be safe. Also – and this is important – you should never try to push an electrical line (or fuse box or breaker box) beyond its rated capacity.

Chances are that you won’t be the one to have to figure out the capacity of your electrical lines – this will be done by the electrician who wires up whatever building is being powered. In fact, what the electrician should be doing is evaluating the load the line can carry and then installing a main circuit breaker that will limit the amount of current entering the building to make sure that you can’t overload the line. If the main power breaker is chosen correctly then it should be impossible for you to overload the line leading into your home.

Of course, you have multiple breakers in any breaker box – the electrician who wires up your building will be putting in a host of breakers to serve all the different parts of the building; the kitchen draws more power than the bedroom; a shop pulls more amps than an office. A good electrician will wire up your breaker box with this in mind – as well as running the right gauge of wire from each breaker to the room (or area) in question. Again – as long as you don’t try to push the circuit beyond what the breaker will permit then you should be OK.

This last part is important enough to warrant repeating – you should never try to push and electrical line beyond its rated capacity. Specifically, this means that you shouldn’t try to block a circuit breaker to keep it from popping, you shouldn’t try to wire around it to give yourself a little more load, you shouldn’t replace a breaker with a higher-capacity one, you shouldn’t wrap foil (or insert a penny) into a fuse holder – just use the circuit as the electrical installed it. And I know that in some older buildings you just can’t run everything you want off of an electrical system designed before the Second World War. I feel your pain – one of my earlier apartments had an old electrical system and in the summer I had to choose between my air conditioner and anything else; I was unable to use my microwave when the AC was on. And, for that matter, every time I ironed my clothes I had to turn off the AC. But I also knew that, in a building of that age, trying to get around this limitation could be dangerous – the only right way to try to add capacity would have been to replace the wiring and the breaker box with something more robust. Since I couldn’t (and the landlord wouldn’t) do this I had to live with it until I could move to a better building with newer wiring. 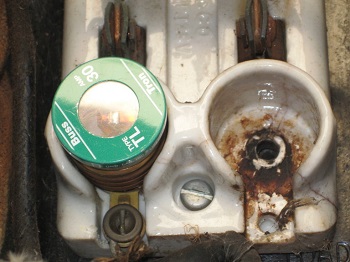 Before the days of Circuit Breakers homeowners and
renters would sometimes use pennies instead of fuses for
their fuse boxes when it came time to replace the fuse.
Pennies were useful because they wouldn't burn out.
Unfortunately, later, the wiring does and cause a fire.

At this point I should say that this topic is something very near and dear to my heart. And not because I’m an electrician, because I’m not – but I was stationed on a nuclear submarine for several years and we had over 20 electrical fires during my time onboard. I should hasten to add that this was not because we were overloading our electrical lines – the Navy was very strict about that. But I was on an old submarine and, as wiring ages, it becomes more prone to overheating. Most of these fires were minor; three were not (we had a fourth potentially serious fire while I was onboard, but it was non-electrical in nature). The minor fires were an annoyance; the major fires were a bit more – two of them came when we were close to the Soviet Union and a third forced us to perform an emergency reactor shutdown, to blow our main ballast tanks to get to the surface, and to pretty invent a recovery procedure on the fly so we could get the reactor started up again.

And it wasn’t just fires that made me respect electrical hazards – on another occasion we had a fireball inside one of our main electrical panels that completely vaporized two inch-thick copper bars and welded electrical contacts through the rest of the panel. I could go on, but you get the idea – electricity is something we can’t run our lives without – and it can also cause no end of problems. In fact, it could well be the most dangerous thing that we simply take for granted. All the more reason to not mess with the limits your electrician set for you when he (or she) installed your circuit breakers!

Finally, I should mention a few of the terms you might hear and what they mean. There are a number of other terms; these are the important ones that relate to this piece.

There is a LOT more to electrical safety than what I’ve mentioned here. And I have to acknowledge that I really didn’t even give a specific answer to your question (sorry…), but that’s because there is no simple answer. What I hope you’ve gotten out of this is:

Having said that, as long as your electrical system was installed (and is maintained, or checked by) by a qualified electrician, you will most likely be OK. But you do have to make sure that all of your electrical work and inspections are performed by a licensed electrician – this is not an area where you should try to save money by doing it yourself or asking a friend to lend you a hand.