How Long Can a Spark Smolder?

Posted by Dr. P. Andrew Karam on 2/1/2016 to fire safety
Share |
Hello! We do a lot of grinding and welding, which can throw some sparks. How long can a spark smolder? And are there any other fire safety tips you can give us? Thanks!

Interesting question – and the answer’s a bit more complicated than you might think. I was in the Navy for several years and we had to set a Fire Watch whenever hot work was taking place; in addition we had to keep a re-flash watch stationed after any fire had been put out, to make sure it didn’t flare back up when we left. Having a fire on a submarine is bad enough; even worse to have it come back. There were no hard-and-fast rules as to how long to station the re-flash watch or how long to keep the Fire Watch set after the hot work ended – normally we’d let it go after about a half hour, but it depended on a couple of factors. 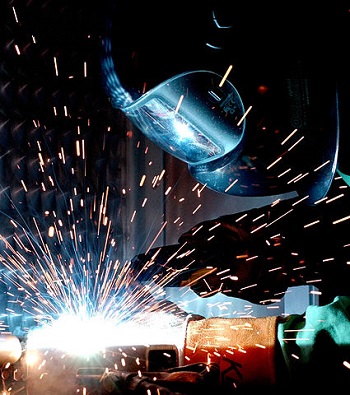 Before getting into some of the factors, I have to note that we treated the Fire Watch and the re-flash watch differently. In the case of the Fire Watch, we were guarding against the possibility that stray sparks might be smoldering and could start something; on the other hand, in the case of the re-flash watch, we knew that a fire had actually been burning – that called for a little more care.

First – let’s talk about the Fire Watch. In this case we were worried about sparks from grinding, cutting, or welding; specifically, worried that these sparks might have fallen into something flammable. And this was a real concern – we had a fire on my submarine once when we were in port when sparks from hot work in the Control Room fell into (believe it or not) our toilet paper stores on the level below, setting them on fire. The fire was out in less than 10 minutes, but it still filled the space with smoke and called for an all-out response. Most of the time we’d keep the Fire Watch set for at least a half hour after hot work had stopped but, if it had been extensive, we’d keep it stationed for up to an hour.

Having said that, sparks and hot spots (especially in welds) can linger for a long time. Consider – primitive societies will bank fires to keep the embers smoldering overnight. Think about the fire triangle – you need heat, oxygen, and fuel to start a fire. So take a spark and insulate it (so it maintains its heat) and deprive it of oxygen (so it can’t burn) – as long as it stays hot enough to re-ignite it’s a fire hazard, and if it started off hot enough it can remain dangerous for many hours. Sparks from grinding and welding, for example, might be over 2000˚ C – under the right conditions (say one were to fall into a crack or tiny hole) this might stay hot enough to cause a fire for a half day (longer under some circumstances). Does this mean that you have to keep watch for a half day every time you do any grinding, cutting, or welding? Not necessarily. What it does mean is that you have to prepare your area as well as you can to prevent sparks from coming to rest in anything that might burn, and then keep watch for a reasonable amount of time (at least a half hour, and longer if there’s a lot of flammable material in the area). You also have to be careful to think about all of the places where sparks might fly – we somehow missed a small gap that let sparks into our toilet paper stores; had we covered it properly then I’d have one less fire story to tell.

The other time you might need to be concerned is when you know that you’ve had a fire – whether accidental or deliberate (e.g. a campfire, or incinerating waste). Let’s take each of these possibilities in turn, starting with the deliberate fire scenario.

If you set a fire then you can either contain it (in a fire circle, for example) or isolate it (in, say, an incinerator). Either way, the fire will be in a place that you can design to be safe. That being the case, the risk from the actual burning should be fairly low, as will be the risk from smoldering embers. Even if they’re cut off from oxygen and well-insulated they’ll eventually cool to a safe temperature. The risk here is if you clean out the ashes before everything cools off; say a day or two after the last fire. But not matter how long it’s been, you should assume that hot embers are lurking in the ashes – when you clean them out you need to treat each shovel-full (or whatever you’re using to do the cleaning) as potentially hot – don’t put them into containers that can melt and don’t put them in with flammable materials. If you want to be even more careful you can stir the ashes to mix any potentially hot ashes in with colder ones – you can even mix in some water to add an additional safety margin.

On the other hand, you might have an accidental fire that you’ve put out and want to keep from flaring back up again. In this case, the setting isn’t as controlled – you don’t necessarily know where sparks might have flown or how far they might have traveled. In a small fire, for example sparks might not travel very far and there’d likely be very few of them – a large conflagration, on the other hand, can throw sparks hundreds of feet in the air and they can travel hundreds of yards (indoors fires are a bit easier – at the least they’re somewhat contained, although there are also a lot of nooks and crannies that sparks can fall into). You need to cast your net accordingly. Big-picture-wise what you need to do is to try to figure how far sparks might have flown and then add at least fifty percent – so if you see sparks flying a hundred yards downwind you should check everything within 150 yards of the site of the fire. Within that perimeter you can try to soak everything with water (easier to do if the fire was fairly small), or you can simply do a close search of everything – either by eye or using a thermal imager. In the Navy we had a good budget so we used thermal imaging to look for hot spots or sparks – but we had an expensive submarine with a LOT of flammable materials inside (not to mention a nuclear reactor, explosives, and pyrotechnics); the stakes were a bit higher for us.

Something else you need to consider after putting a fire out is that you can have smoldering materials hiding out of sight. For example, in our engineroom we had to consider that lube oil or fuel oil might have soaked into the piping insulation and could be smoldering – as soon as the fire was out we’d rip off the insulation until we were certain we’d gone beyond any potential problems. In the case of our smoldering toilet paper, once the fire was out we cleaned out the stores area completely, carefully looked everywhere else in the area, checked adjacent storage areas (in case the heat against the walls ignited flammable materials in those areas), and checked both above and below the seat of the fire. Then we stationed a re-flash watch for the next hour, just to be safe.

Fires happen – most are avoidable, but whether or not someone is at fault, they’re going to happen from time to time. Your actions can help to prevent fires – by preparing an area properly before doing any hot work and by having your planned fires in safe locations, for example. And if you have an accidental fire, once it’s been extinguished your actions can reduce the risk that a fire might flare up again. And as you’re planning both your fire prevention you need to remember – embers and sparks can smolder for anywhere from a few hours to a day or more depending on the circumstances.