The first time I ever heard of lockout/tagout was when I was in Machinist Mate School in the Navy. To be honest I’d never thought about the topic before – I’d never before worked anyplace more dangerous than my high school home room (unless you consider mowing lawns). When the topic first came up I was surprised – at first surprised that such a system even existed. Later, when I learned more about all of the hazards that existed in the engineering spaces (high-pressure gases, hydraulic systems, high-voltage electricity, rotating machinery, high-pressure and high-temperature steam, and so much more. When I reported to my submarine I found even more things that could injure, maim, or kill you – the nuclear reactor plant, explosives, pyrotechnics, and the ocean that was continually trying to get into the submarine to sink us. By the time I got out of the Navy I took the lockout/tagout system for granted in the Navy, but thought that it was military-specific; it never occurred to me that it would exist in the civilian world. That particular misconception was corrected a few years later, when I worked for an environmental consulting firm doing work with the Department of Energy (DOE) – here, too, I quickly learned that lockout/tagout was as ubiquitous in the civilian world as in the military, and with good reason. But let’s back up a little bit for those of you who might not have had much exposure to this system.

If you're looking for training materials, we sell lock-out tag-out training videos. 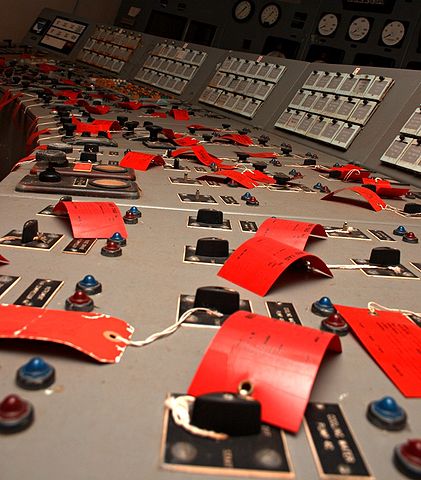 Tagged out controls in the control room of an abandoned power plant.

Say your boss asks you to fix something – a high-pressure hydraulic system for example. Tempted to wrap up the work as quickly as possible, you might be tempted to grab your tools and dig into the system. And then someone turns on a system that requires hydraulics and you’re sprayed in the face with a jet of 4000 psi oil while the hydraulic pump grabs your shirt cuff. At this point it might occur to you that it might have been a good idea to let someone else know about your project to keep them from using this particular system.

The problem is that, unless you tell everyone who might have reason to start this system (not to mention any automatic systems that could turn it on remotely) you’re still at risk. But there’s a better alternative – find every single way that the system can hurt you, figure out how to disable these (and do so), and then hang tags on all of the appropriate valves, switches, circuit breakers, and so forth to keep anyone (whether you were able to talk with them or not) from operating them. If you do your homework properly and get all of the tags hung then you should be OK. And that’s the point of the lockout/tagout system – you make the system safe for you to work on and then you hang tags so that everyone else knows they can’t reposition equipment in a way that could put you (or the equipment) at risk. At least, as long as they’re trained not to touch tagged-out equipment! By the way, it doesn’t have to be you that’s hurt – running a hydraulic system that’s been drained of its hydraulic fluid can be bad for the system too – just as running your car engine without oil can be bad for the engine. The lockout/tagout system protects the equipment as much as it does the people who are working on it. 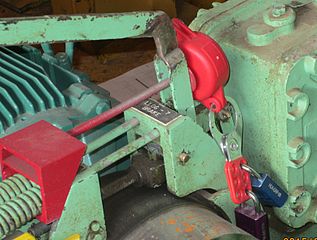 A lockout device applied to a hoist brake.
The device prevents manual or electrical release of the brake.
This prevents unexpected movement of the hoist mechanism.
This hoist is used for a spillway gate. The lockout device is
held in place with a lockout scissors and secured with two padlocks.
In this plant, one padlock is placed initially to secure the
device, and the second padlock indicates that the lockout
has been checked and verified.

And this is the purpose of the lockout/tagout system – it’s a way to keep people and equipment from being accidentally hurt or damaged. But this isn’t just a good practice – it’s also an OSHA requirement in the category of Hazardous Energy Control (systems with high-pressure fluids, high voltage, high temperatures, and similar hazards are considered to contain hazardous energies). The bottom line is that lockout/tagout is a good idea and a regulatory requirement.

Of course, you have to make sure you do it right! I remember one instance in which we were working on a major piece of electrical equipment on the starboard side of our electrical plant. The electricians wrote the tagout, had it reviewed and approved by the supervising officer, and they hung the tags. Then the electric plant was shifted so that work could being and, as the electrical operator closed the final breaker, we heard a loud bang from the starboard side – it turns out that the tagout was written for the port side of the electrical plant and the tags were all hung on the wrong equipment. We blew up some major electrical breakers and a put a major piece of equipment out of commission for days. But we got lucky – although the system had 450 volts of AC power and hundreds of amps running through it nobody was hurt.

Regulations require that you have a lockout/tagout system (at least, if your company has potentially hazardous energies present), and that your workers be trained on it. Hopefully common sense – and a reluctance to hurt your fellow workers – requires that you implement it thoroughly and thoughtfully, and with attention to those little details that can make it more than a simple paperwork requirement. 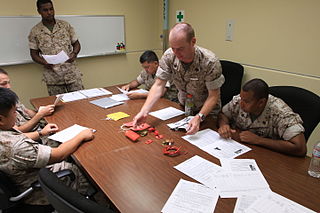 A USMC officer points out several devices used to conduct a
Lockout/Tagout procedure during a Lockout/Tagout class at the
Navy Cryogenics facility. During this session the officer explained
that disregarding any step in the procedure could result in
serious injury or death.