Posted by Dr. P. Andrew Karam on 1/12/2016
Share |
Awhile back someone posted a question to this webpage about the likelihood of a chemical attack by terrorists. Given recent events, it seems like a good time to tackle this question, as well as to go into how to keep yourself (and your co-workers) safe if there is such an attack. What I’d like to do is, first, to give a little bit of background information, then to discuss the threat of a chemical attack and, finally, what you can do if one occurs. 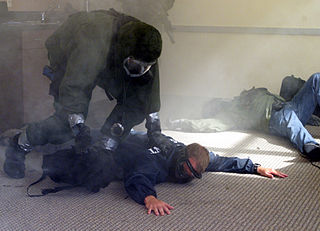 Naval Station Anacostia, Washington, D.C.
(Sept. 13, 1999) Members of the U.S. Park Police
"SWAT" team take down "terrorists" who were
holding hostages at Naval Station Anacostia.
The anti-terrorist exercise pitted police against
the chemical biological warfare terrorists.
What Chemical Weapons Are and How They Work

Broadly speaking, a chemical weapon is a weapon that is based on exposing your enemies to toxic or irritating chemicals. Please note – explosives can be considered to be harmful chemicals (they’re chemicals, after all, which can cause harm when they blow up). But explosives cause harm through their blast – this is different than, say, mustard agent, which causes blisters and chemical burns. Chemical weapons can be simple (chlorine gas, for example) or complex (nerve gas) or anything in between. In general, the more complicated it is to produce a chemical agent, the more resources will be needed to produce it – pretty much anyone can release chlorine gas (for example) but making nerve gas might require the resources of an entire nation. So let’s look at some of the types of chemical agents.

Toxic industrial chemicals are chemicals that are commonly used and that are harmful in and of themselves. Chlorine and ammonia are examples of these – they’re both used industrially and only have to be vented from their storage containers to cause harm or distress.

Vesicant and blister agents cause skin irritation, burns, blisters, and can damage the lungs if inhaled. The best-known of these is mustard agent (either sulfur or nitrogen mustard); Lewisite is another. Some of these are difficult to manufacture; producing others requires only a few steps and relatively little skill. Mustard agent can also damage bone marrow and the immune system and that there is no known antidote. ISIS (for example) has produced some mustard agent, as have Syria and a number of other nations.

Choking and pulmonary agents can form acids when mixed with the fluids of the lung, leading to the production of fluids that can cause respiratory distress. Chlorine, nitrogen oxides, and phosgene are examples of choking and pulmonary agents. These agents can cause damage to the lungs that can lead to dry land drowning as a worst case scenario. Light inhalation, however, may only lead to vomiting and diarrhea. Heavy inhalation is what results in immediate inflammation of bronchioles and lungs. Also, there is no known antidote so physicians can provide only supportive care. ISIS has used chlorine gas in some of its attacks.

Asphyxiant and blood agents can damage the red blood cells or can interfere with the ability of our cells to absorb and use oxygen. Hydrogen cyanide is one of these agents, as is cyanogen chloride. Al Qaeda seems to have developed hydrogen cyanide that was planned to be used in an attack, and the Japanese Aum Shinryko cult tried unsuccessfully to use this agent in an attack in the 1990s. One good thing, though, about these agents is that there IS an antidote: for example: Lilly Cyanide Antidote Kit, which has nitrites and sodium thiosulfate. Other antidotes are available as well.

Nerve agents affect the nervous system by increasing our levels of acetylcholine, which overstimulates the nervous system leading to over-reactivity of various muscle groups and malfunctioning of organ systems. Since nerve impulses control our breathing, heartbeat, muscle contractions, and so forth, anything that interferes with their proper operation can rapidly become fatal. Luckily, there are antidotes, such as the drug Atropine, which reverses the effects of the nerve agent when given in a timely manner. Aum Shinryko synthesized sarin for their 1995 attack against the Tokyo subway system, and it’s thought that Syria used this agent against its rebels. Other nations (e.g. US, Russia) have developed much more sophisticated agents that are among the most toxic such agents known.

Chemical weapons were first used on a large scale during the First World War and their use was traumatic enough to the warring nations that they were not used again for decades and, with the exception of the Russian use of chemical agents in Afghanistan during their invasion in the 1980s, no industrialized nation has used these weapons since World War II. In spite of this, the US, Russia, Britain, and other nations developed huge stockpiles of chemical weapons, including fairly advanced nerve agents. More recently, a number of nations have developed (and sometimes used) chemical agents – significantly, these include Syria and Iraq, both of which have lost control of significant swathes of their territory to ISIS. So we have to accept the possibility that ISIS might have captured chemical weapons. In addition, we know that ISIS has not only had chemical weapons used against it by Syrian forces, but that they’ve used some themselves – both toxic industrial chemicals such as chlorine, as well as crude mustard agent. And we also have to remember that Aum Shinrikyo was able to synthesize and use sarin in their attack against the Tokyo subway system in 1995.

So – putting this together, it seems clear that terrorist groups have had access to chemical weapons as well as to toxic industrial chemicals. In addition, it also seems clear that terrorist groups have been using these agents overseas. Given that, the obvious question is whether or not they’re going to use such weapons here in the US. And the answer to this is that we don’t know – just because there hasn’t been a chemical attack in the US or Europe doesn’t mean that there won’t be one at some point in the future. We just don’t know.

Given that, here are some things that we do know. First is that guns and explosives have been the terrorist weapons of choice for many years and they’re likely to remain so in the foreseeable future. Recently, there have also been attacks using bladed weapons (knives, axes, and so forth) – but there have been no chemical attacks…yet. Having said that, though, we don’t really know what might happen – we know that terrorist organizations have launched chemical attacks in the Middle East using so they obviously have the capability; but there’s no way to predict if (or when) they might change to a different mode of attack.

So – what’s the risk of a chemical attack? I can’t give you an estimate in terms of a date or a probability that an attack will take place – there’s no quantitative answer to this question. Answering qualitatively, I’d have to say that the risk is high enough that we should know what to do if an attack occurs, but not so high that you should sell your home, build a shelter, or wear a gas mask to work.

What To Do If There Is An Attack

The first thing is recognizing that an attack has taken place at all; if you don’t know what’s happening then you don’t know to take protective actions. If someone releases chlorine or mustard gas then you might see a cloud of green, yellow, or maybe brownish gas rolling towards you; but a number of chemical agents are invisible – it could be that your first indication of something happening would be by seeing its effects. You might see people coughing, choking, even falling to the ground – nerve agents might also make people salivate, they might fall or start twitching, or (if an irritating agent is used) they might start to show signs of skin, eye, or lung damage. The first indication, though, might not involve people at all – you might see animals exhibiting these same symptoms.

If you recognize that there’s an attack taking place the actions you take could save your life. Here’s what the Department of Homeland Security recommends you do if you recognize that you’re caught in a chemical attack. Remember – you should NOT evacuate unless the authorities tell you it’s safe! Many chemical agents cannot be seen – you don’t want to find yourself running through the plume by mistake. Remember, too, that many chemical agents are heavier than air – if you’re finding shelter, you should avoid low-lying places (e.g. basements, subway tunnels, etc.).

If you’re inside a building and a chemical agent has been released indoors:

Chemical weapons have been with us for some time; they have been – and can be – dangerous. We know that terrorist groups have used them in the recent past, and we know that they have the ability to make improvised weapons (using Toxic Industrial Chemicals) and some more sophisticated ones as well (mustard agent, or sarin). And we know that there’s a chance a terrorist group (either foreign or domestic) might try to use chemical weapons against us. That being the case, it’s good to know what to do if you’re caught in an attack.

The biggest thing is to try to get to safety, without passing through a chemical plume. If you’re outside, head indoors; if you’re indoors then leave the building or try to find a room with a window you can open – but don’t shelter in low-lying rooms or areas. Try to change any potentially contaminated clothing and wash your exposed skin and, when it’s safe to do so, try to find medical attention if you’ve been exposed. And don’t try to evacuate until you receive word (probably via TV or radio) that you can evacuate safely, and until you know what route you can safely take.

Many thanks to Dr. Erin Stair for her help with this piece!


About the Author: Andrew Karam is a board-certified health physicist with 34 years of experience in his field. He has earned a BA and MS in Geological Sciences and a PhD in Environmental Science, all from the Ohio State University. He has presented over 100 invited lectures and scientific talks at meetings in the US, Europe, South America, and Asia. Dr. Karam currently works on issues related to radiological and nuclear counter-terrorism; in the past he has been in charge of radiation safety for a major research university and hospital, as a professor at the Rochester Institute of Technology, and as a private consultant. He has also undertaken a number of projects internationally, working in Kuwait, Dubai, Paraguay, Uruguay, Cambodia, Cyprus, and Lithuania – his most recent overseas project involved traveling to Japan in the immediate aftermath of the tsunami and reactor meltdowns in Fukushima. He is the author of over two dozen scientific and technical papers, over 200 encyclopedia articles on various aspects of science, and several hundred editorials, essays, and articles for a variety of publications for both scientists and the general public. He has also written 16 books, including his memoir of life on a fast-attack submarine, Rig Ship for Ultra Quiet. Dr. Karam is married with five children and he currently lives in Brooklyn.